The Media File Scanner for Net-X-Code is an add on that can scan local, network, Amazon S3 and Google Cloud Storage drives and help to organize and make best use of all of your post production and broadcast media.  The Media File Scanner will provide a complete, logical view of your audio/video/still assets, and generate a list of available media so you can catalog, proxy, thumbnail, metadata extract and call third party rest interfaces, executables and scripts. 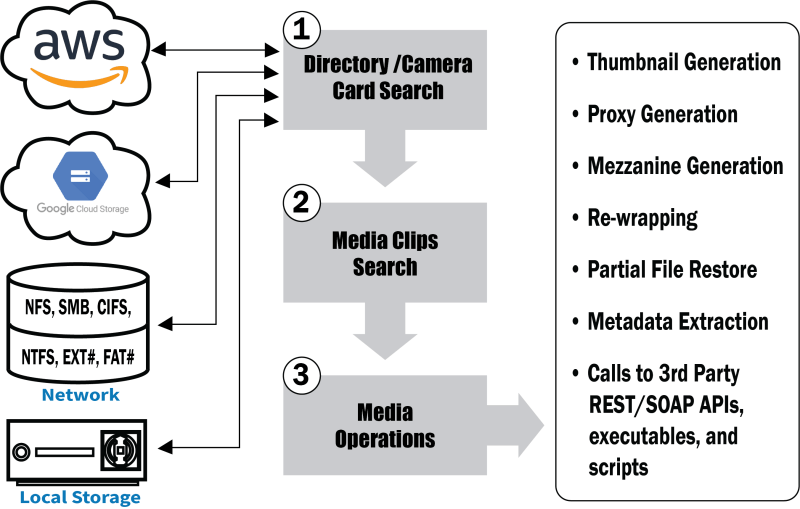 The Net-X-Code Media File Scanner supports the industry's widest range of audio/video/still and camera card formats.  Clips include references to all their component files, and include automatic stitching when recordings break the video into separate files.  Some of the supported formats include, but are not limited to:

As the list of clips is generated in the database, one or more Net-X-Code Server instances can be used to process useful information from them.  Operations include:

Drastic is committed to supporting open formats to make Net-X-Code and the Media File Scanner as widely compatible as possible.  All output formats are standard media file formats like MP4, MOV, MXF and AVI.  All proxy/thumbnail are stored as MP4, Dash, HLS and JPG.  Metadata is transported in the XMP XML file standard.  All database entries are kept in plain text or integer and available for other programs to use or to be altered to customize Net-X-Code/Media File Scanner workflows.

Net-X-Code is a group of IP capture, control, convert and output applications designed to run on one or more servers on your LAN, in the cloud, or as a hybrid....