AJA video boards generally include a Mixer Keyer element.  DrasticDDR, MediaNXS, and QuickClipXO do not directly control the Mixer Keyer, but they are designed to allow the user to use the Mixer Keyer alongside the main software.

To use Drastic software with the Mixer Keyer, you will need:

The way Drastic software works, once it is in playback or record mode, it does not re-route the AJA card.  If you switch between pause/play and stop/ee/record, then you will need to set up the Xena Router agasin.  Before trying to re-route the Xena Router, running MediaNXS and playing/recording will give you an idea of how the routing works.

To set up the Mixer Keyer for keying over playback, move the cables like this: 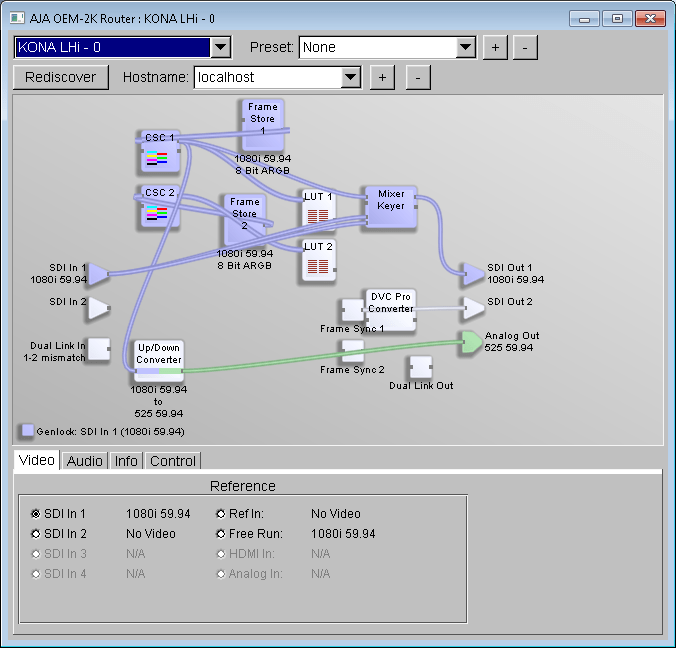 Finally, connect the Mixer Keyer output to SDI Out 1 input, and make sure the Video lock is set to SDI In 1 so the signals lock up.

The setup of this dialog is highly dependent on what you are trying to do.  The setup above takes a playback and does a luma key using the SDI 1 input to create the output.

Using FlowCaster with Avid Media Composer FlowCaster creates an Open I/O board in Avid creative software like Media Composer.  As a virtual video board, it can send the same high quality audio... Tips, Tricks and Technical Information

Synchronous Collaborative Review The synchronous collaborative review workflow lets an operator select a proxy file/timeline from any network storage that is available to all participants and s... Tips, Tricks and Technical Information

Optimizing Windows for Drastic Software When using Drastic software on Windows, for some operations system settings must be altered to allow for the performance necessary for the workflow. This includ... Tips, Tricks and Technical Information

We offer standalone software for the end user or enterprise, integrated solutions for automated workflows, and OEM tools for custom applications or branded devices.