Drastic Technologies' free TcCalc timecode calculator has been a part of Drastic's software since 1995.  It is also available as a free standalone utility for personal or corporate use.  The latest 4.0 release includes support for Windows 32/64, OS-X, Linux 64 and Google Android.  A previous version is also available for Windows 95/98/ME, NT and 2000.  TcCalc is also ideal in conjunction with Drastic's post and broadcast file previewer, HD-SDI player/recorder and Digital Disk Recorders. 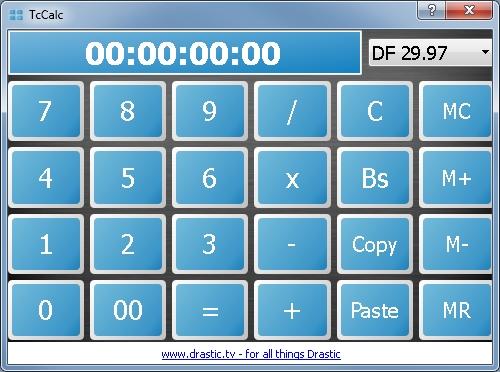 Cut, copy and paste of time codes are available as buttons or using the standard <CTRL>+X/C/V.  This allows easy movement of time code operands and results to and from TcCalc.  Time codes may be easily moved between TcCalc and other video applications (like videoQC), or to and from text files and spreadsheets.

The following video standards are supported: