Adobe's Premiere Pro software and Creative Suite have become one of the most incredibly efficient and powerful editing systems available today.  Drastic's MediaReactor Workstation integration allows you to extend and expand the functionality of this industry standard product.  Drastic DDR servers provide extensive content capture options, including real time editing while recording without interrupting or breaking up the record file.  Most components, including After Effects and Encoder are also supported.

Like the Premiere editor, After Effects and Adobe Encoder also support MRWS for input of supported files, and export via the Premiere export plugin.

MediaReactor Lite for Adobe provides a subset of MediaReactor Workstation file support, for immediate access to the most requested range of formats in Adobe products. Work directly in Adobe with camera raw formats like KRW, MLV, Panasonic and Canon. This plugin also provides output to ProRes, MPEG-2, and XAVC-S, as well as MOV QuickTime replacement files 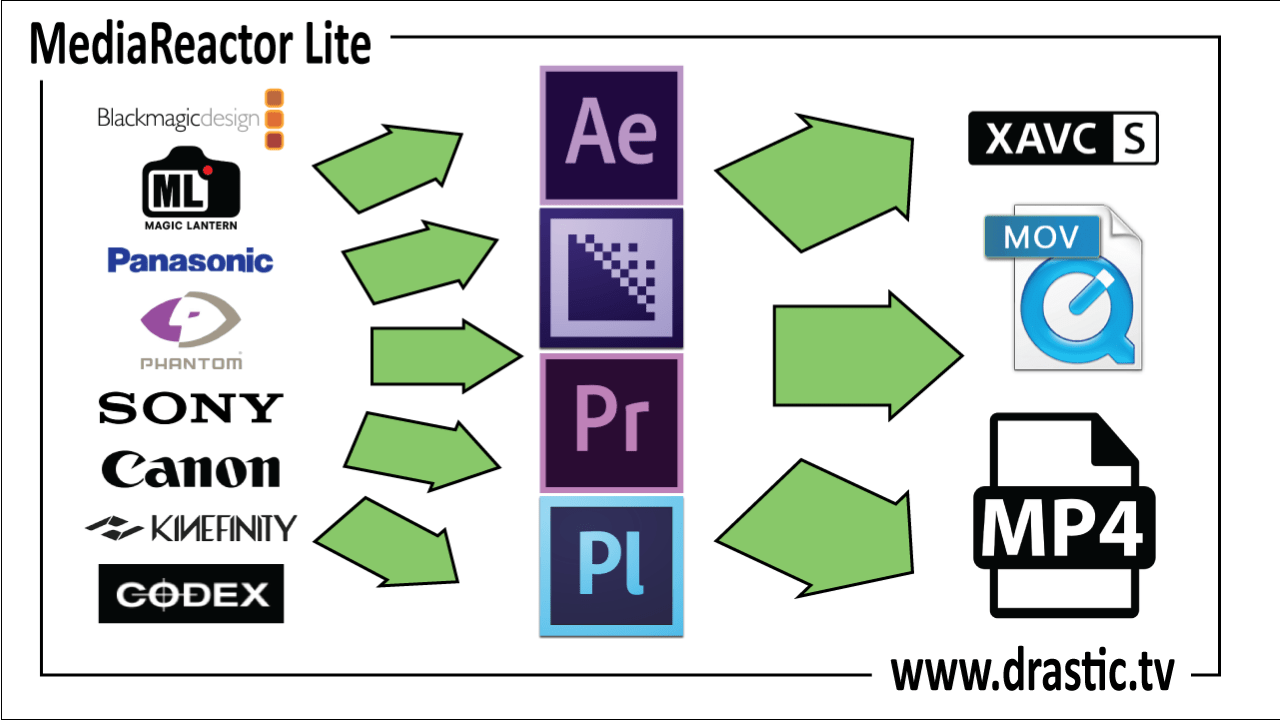 Net-X-Code provides Premiere with files that are either natively supported, or supported through the MRWS plugin.  Net-X-Code allows one or more channels of HD-SDI to be recorded to disk in AVCi, DVHD, DNxHD, Uncompressed, or other supported compression type. These files can be used directly for editing in Premiere, ether by recording in a natively suported format (MOV, MXF, AVI, etc), or by reading them with the MRWS plugin.  A critical advantage of the Net-X-Code workflow is the ability to perform live record editing. While the file is recording and still open in Net-X-Code, Premiere can open and start editing and reading the live recording file.  All the material recorded up to about a second before the current time is available for editing, review and export.  As the event goes on, more material becomes available automatically with no intervention necessary by the operator.  Multi-channel recordings can be controlled by SyncControl Pro for multi-cam editing during the event.  Once the recorded event finishes, the last few edits can be made, and the production ready without unnecessary delay.

MediaNXS offers a wide range of capture and playback features, along with Edit While Record functionality. Capture to compressed and uncompressed formats directly supported by Adobe, or use the MRWS plugin to work with material directly within Adobe as it is being recorded. Provides a range of scopes for signal analysis, robust clip list and timeline output, handy import and export features.